A quick google search tells you that “the Anthropocene” refers to the proposed geological epoch in which we are currently living—one that began when human activity started to significantly alter ecological processes, change the climate, and appear in the geological record.

In his upcoming Global Change & Sustainability Center (GCSC) seminar, “Whose Anthropocene? A data-driven look at the prospects for collaboration between natural science, social science, and the humanities,” Associate Professor of Philosophy Dr. Carlos Santana argues that understanding the Anthropocene isn’t quite as simple as it may appear. In fact, scientists from across different disciplines don’t even agree—what is the Anthropocene? When did it start? And why does it matter? 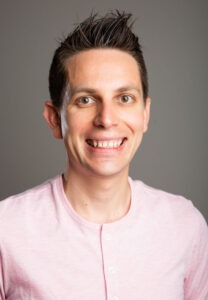 “I get to hear the way that people with very different perspectives are talking about environmental change, about the Anthropocene, about our planet,” Santana says. “They’re not talking about the same thing. And I wonder if I can pin down what it is that everyone is talking about.”

As a child, Santana wanted to become a scientist until he realized that this would likely require him to choose a specific area of expertise. “I wanted to be involved in science, but I didn’t want to have to have a really narrow focus,” he explains. “I wanted to be like one of those old school guys from the 19th century, who got to just study everything—be a biologist, and a geologist, and a psychologist. So, I became a philosopher of science.”

Santana explains that generalists who can look broadly at issues and find connections between different scientific disciplines are important, especially when studying complex and multifaceted issues like the Anthropocene.

“There’s been broad acknowledgement that the Anthropocene isn’t an idea that should just be owned by the earth sciences,” says Santana. “If human society is causing geological changes—the kind of changes that will show up in in the geologic record—then you can’t just study that using the traditional tools of geology. You need to have social-scientific perspectives at the very least, because you’ve added human societies to the equation.”

Interdisciplinary study of the Anthropocene is challenging, however, as it requires collaboration between disciplines that use different methods, tools, and scientific languages.

“If you have an atmospheric scientist and a hydrologist working together, they have a common set of methods and vocabulary and things like that,” Santana explains. “They can write a scientific paper together, bringing evidence from both of their disciplines. But it becomes a big deal when you get, say, a geologist, and a sociologist, or historian, trying to sit down and do work together.”

And that’s where Santana’s work comes in—to understand how scientists are discussing the Anthropocene, to find connections between different disciplines, and to synthesize their research toward a common understanding of what it means to live in a human-caused geological epoch.

Tune in for Santana’s Zoom seminar on Tuesday, Sept. 28 at 4 p.m. to learn more.