Portland, Oregon is known for its cutting-edge climate policy, sustainability initiatives, and resilience planning. In recent years, however, Portland has shifted its focus—from climate action to climate justice.

On Tuesday, April 13 at 4 p.m., Dr. Liliana Caughman, who has devoted much of her research to 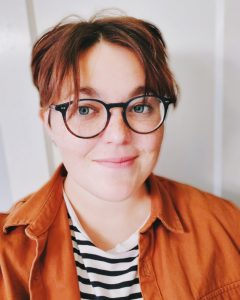 Portland’s climate efforts, will share the city’s challenges, successes, and lessons-learned in her GCSC seminar, “From Climate Action to Climate Justice: How scenarios, partnerships, and community priorities are driving equitable urban sustainability and resilience planning in Portland, Oregon.”

Caughman is an interdisciplinary environmental and social scientist with a focus on urban sustainability and resilience, a faculty member in the Native Environmental Science program at Northwest Indian College, and affiliated faculty at Portland State University’s Institute for Sustainable Solutions.

“My undergraduate degree was in physics at UC Berkeley, and I loved that,” Caughman says. “I ended up really just wanting to figure out how to apply those skills more for the pressing problems in our world, so I…started working in renewable energy, and it was there where I got to combine physics with thinking about climate change and energy transitions.”

Drawn to solving complex, multi-faceted environmental problems, Caughman returned to graduate school where she began conducting research related to climate justice. She said that in graduate school, “connecting the science with communities and people of color and my own identity all came together.”

Caughman emphasizes the importance of procedural justice in Portland’s shift from climate action to climate justice: “If the processes that we use to make decisions around sustainability and resilience planning…are just and equitable and fair, then I believe—and I’ve seen through some of my research—that the outcomes can be as well,” she says. “These institutions have been so unjust for so long; the only way we can get to the better outcomes we want is by making better processes.”

Better processes are community-engaged and empower local voices using research and academic tools, Caughman says. “We know that we won’t get to the best solutions for everyone if we don’t listen to everyone,” she explains. “There’s a lot more knowledge out in the real world—in the community—than just inside of the halls of academia or the city government.”

Research shows that some communities in Portland will experience disproportionate effects of extreme, climate-change-induced weather events. “Just because the Cascadia earthquake or a 500-year flood would be devastating for everyone, it actually will be more devastating for certain groups than others,” Caughman says. “And so that’s one of the wheels that started turning to help us realize collectively that we can’t just focus on resilience as a blanket statement—there actually needs to be focus on specific communities and groups of people that are going to feel the brunt of this.”

Portland communities have expressed that gentrification, poverty, and environmental racism are among the issues that must be addressed in the city’s climate justice plan. “Equity can’t just be on the side, but actually has to be at the center of the work,” Caughman explains. Climate justice is about resiliency and sustainability, not only in the natural environment, but also in the built and economic environments.

Caughman encourages other cities to learn from Portland’s successes and mistakes as they embark on their own climate initiatives. “Just skip a lot of the learning curves that Portland has had in some of their previous plans and jump wholeheartedly into the really hard work of thinking of it in terms of climate justice, which means integrating the community,” Caughman says. “It means thinking about surviving climate change—not just mitigating it—and it means a lot of partnerships, and being interdisciplinary, multi-disciplinary, and just continuing to try and learn through the process, even if you’re making mistakes as you go.”

Register in advance and attend Caughman’s Zoom seminar on April 13 at 4 p.m. to hear more about Portland’s climate justice initiatives, and what other cities can learn from their efforts.