Take part in our space heater exchange program to help reduce energy consumption and greenhouse gas emissions while keeping you comfortable. For every personal space heater brought in as part of this program, University faculty, staff and interns can choose between an energy-efficient electric blanket or plush non-electric blanket. Blankets are also available for purchase without trade-in. 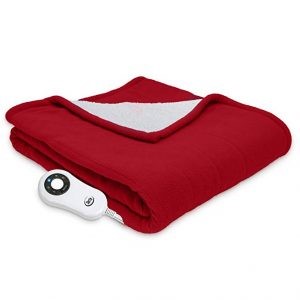 Personal space heaters are energy drains and greenhouse gas emitters that affect the air we breathe. By switching to an electric throw, you’ll make an immediate difference.

These electric throws use 90% less energy than a typical portable electric space heater! Energy savings also result in fewer greenhouse gas emissions. Using a typical portable electric space heater for 8 hours produces carbon dioxide equivalent to driving 20.7 miles in an average passenger vehicle. To put this in perspective, by switching from a space heater to an electric throw, you’ll save the emissions equivalent of a trip from the University campus to the border of Idaho – every week!

Our exchange program is open to all faculty, staff and interns who wish to trade in the portable electric space heaters they use on campus. Throws are free with trade-in of space heater, or can be purchased: $20 for non-electric and $30 for electric. To participate in this exchange program, please submit the form below.

This article, originally published in @theu on September 6, 2019, was written by Paul Gabrielsen,
science writer, University of Utah Communications.

For low-income families, paying the energy bill every month can be challenging, as energy bills can account for up to twice the percentage of income as for families with median income. Further, converting to an energy-efficient lifestyle can come with a steep up-front cost, adding another financial barrier to saving energy.

But a recent pilot study, a partnership between the University of Utah and Utah Clean Energy, showed how to break through these barriers to empower Salt Lake City residents with energy saving technologies.

Researchers report in the journal Sustainability that over an eight-month period an LED lightbulb exchange program in Salt Lake City’s west side exchanged 1,432 lightbulbs, reached 181 households and saved participating families a collective $18,219 per year in energy costs. It’s one of several initiatives to introduce efficient technologies in underserved Utah homes and include all income levels in community efforts to combat climate change.

“Through this project we believe that community members realized that efficiency is something that they can do. It’s something that has real benefits to them. And is has spurred interest in taking additional actions to cut energy waste,” says Kevin Emerson, director of the Energy Efficiency Program for Utah Clean Energy.

The pilot study focused on LED lighting because of its accessibility. “Lighting was targeted because it was a simple action that can be taken,” says Daniel Mendoza, research assistant professor in the Department of Atmospheric Sciences at the University of Utah. “It’s something that anybody can do because it’s such a simple act. It’s also something that’s accessible to both owners and renters.”

Using LED lightbulbs donated in part by Rocky Mountain Power, Utah Clean Energy set up 23 community events in two ZIP codes on Salt Lake City’s west side. At the events, members of the community exchanged up to 15 older lightbulbs for new 9-watt LED bulbs, and received information about additional low-cost energy-saving strategies. The researchers also sent participants a follow-up survey to see how many had reached out to other local energy-saving programs.

The lightbulbs, Emerson notes, emit a warm, yellow light at a color temperature of 2,700 Kelvin, which is natural-looking and is less harsh than bluer lights. “We wanted participants to have a positive experience with energy-saving LED lighting so they would think well of energy efficiency and be more open to take additional energy-saving actions,” he said.

Because the pilot program involved an exchange of lightbulbs rather than just a giveaway, the researchers were able to calculate how much energy participants would save with the new bulbs. Assuming each LED bulb would last for 14 years, the project staff found that the exchanged lightbulbs would save, collectively, the energy equivalent of 19 homes every year. The energy-efficient bulbs also save 134 tons of carbon dioxide emissions, along with other air pollutants. Participants shaved, on average, $100 a year off of their energy bill.

“It does make a quantifiable impact in terms of CO2reductions from avoided electricity consumption, as well as the nontrivial amount of money they can save in terms of an electricity bill,” Mendoza says.

The environmental benefits of the LED lightbulbs are well-established. Beyond that, the researchers hoped to learn more about how to influence Utahns’ behavior to engage with energy-saving practices.

The team extrapolated their pilot program results, which reached less than 1% of households in the target ZIP codes, to ask what might happen if an expanded program was able to reach more homes, up to 7.5%. Expanding to that scale would cost more, around $34,500 in the first year. But between the electricity savings and the social cost of carbon (a measure of the economic impacts of carbon emissions) such a program could save a combined $110,000 in that same year.

“It’s really a test case that can then be expanded to help facilitate additional energy efficiency actions being taken that wouldn’t otherwise be taken,” Emerson says. “And we see it as part of a larger transition toward a carbon free energy system.”

“We’ll be able to tell people what we can potentially deliver with additional resources,” Mendoza adds.

The follow-up survey asked participants if they’d taken any action to engage with five different energy-saving local programs. Responses varied, but 51% of participants said they had ordered or planned to order a Wattsmart kit from Rocky Mountain Power, 30% had set or planned to set appointments to seal their homes’ air leaks and 75% said they were more aware of how saving energy reduces pollution.

The pilot program was an overall success, the researchers report, and taught lessons about how to introduce sustainable practices at the community level, as well as additional steps Utah Clean Energy can take to make the program even more accessible to the diverse communities of Salt Lake’s west side.