The ice sheet contains the equivalent of 24 feet of global sea level rise if it melts.

Joerg Schaefer, a paleoclimatologist at Columbia University’s Lamont-Doherty Earth Observatory, will present this new finding and why it matters at the GCSC Seminar Series on Jan. 17 from 4–5 p.m. in 210 ASB.

The Greenland Ice Sheet (GIS) is part of Earth’s cryosphere, the frozen water component of our climate system. The cryosphere plays a vital role in regulating planet temperature, sea levels, currents, and storm patterns. Over Earth’s billions of years, elements of the cryosphere have melted and re-frozen. Understanding how these elements have acted in geologic time scales and during prior periods of climate change enables scientists to model how Earth’s systems will react as the climate warms in the future.

Current climate models, including those developed by the Intergovernmental Panel on Climate Change, are based on the assumption that Greenland’s ice sheet had been relatively stable over the past several million years. The stability of the GIS is under debate. If the GIS was frozen in the past when natural ‘forcing’ (causes) warmed the globe, that means it could stay stable despite human-caused global warming. Unfortunately, Schaefer’s research finds direct evidence from bedrock underneath the ice that the GIS is more at risk of melting than scientists expected.

“We came up with the worrisome result that the Greenland Ice Sheet was actually rather dynamic under natural forcing, which basically immediately means our models overestimate stability with respect to ongoing climate change…” Schaefer explained. “[The prior melting] was due to periods of natural forcing. We will overtake this by anthropogenic forcing very soon, and we just don’t have an argument to expect that the Greenland Ice Sheet will not go again.” 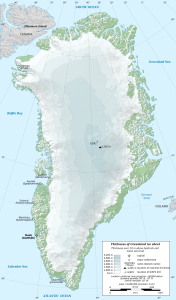 A map of the Greenland Ice Sheet. By Eric Gaba, CC BY-SA 3.0, via Wikimedia Commons

Schaefer and his Lamont-Doherty Earth Observatory Cosmogenic Dating Group’s discovery is the result of groundbreaking direct evidence from rock underneath the ice’s surface. Schaefer said the researchers asked the rock a question: “Have you ever been exposed to open sky?”

The rock Schaefer is referring to is a sample of bedrock from several miles below the ice sheet, obtained in the early 1990s. It took researchers nearly five years to drill out these rocks; the deepest ice core recovered in the world at that time. The sample is so precious that Schaefer and his predecessors didn’t want to work on them until they knew that the research method would produce accurate results. Enter cosmogenic nuclide technique.

Cosmogenic nuclide technique counts the cosmogenic nuclides in the near surface of the rock. These isotopes are produced when extraterrestrial radiation—cosmic rays—trigger a reaction in rock. The reaction produces radioactive beryllium-10 and aluminum-26 isotopes.

Schaefer describes these isotopes as sisters that always occur and decay in a specific ratio to each other. Knowing this relationship enables the scientists to count how long the rock was exposed to open sky, and when it was covered again with ice. Though the process is theoretically simple, it is very complicated to measure. It yields an unprecedented direct record of how the ice has melted and refrozen in the past.

The instability of the ice sheet has implications for policy. Translating this, and other climate science research into governance, is what Schaefer calls the “biggest frontier in climate science.”

“Many of the scientific findings are robust and clear, and now the next step is we have to become much better in transferring that into real decisions,” Schaefer said.

Learn more at Schaefer’s lecture, “Ice sheets, glaciers and society: Past and present cryospheric change and its impact on society,” on Jan. 17 at 4 pm in 210 ASB.