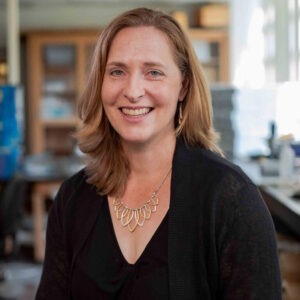 Photo provided by the MacArthur Foundation.

Research shows that disseminating scientific information is, in itself, an insufficient way to prompt meaningful dialogue among the general public. Rather, the way in which science is communicated has more of an impact to promote change.  For scientific findings to catalyze social change, they must be communicated in accessible and comprehensible ways. “Science communication is not something that’s required of me as part of my job,” says Dr. Andrea Dutton, [professor of geoscience at the University of Wisconsin-Madison]. “But it’s something that is very important to me and that I think is increasingly important for our society.”

On Tuesday, Nov. 15 at 4 p.m., Dutton will give a GCSC seminar called “Sea Level of the Past and Future: At the Intersection of Politics, Race, Gender, Ice Sheets, and Corals.” In this seminar, Dutton will share her research on sea levels during past warm periods and explore what this data can teach us about our human-caused present and future climate change. Additionally, Dutton will discuss the need for a more holistic approach to science research that prioritizes effective communication on political, cultural, and environmental fronts.

As a geochemist and paleoclimatologist, Dutton’s research involves a collaborative, interdisciplinary study of coral reefs around the world. Through reef observation, Dutton and her team can determine global sea level changes throughout time, how sensitive ice sheets in the polar regions are to climate change, and how quickly they melt.

Race, gender, and politics play key roles in how global communities respond to climatic changes. “It’s been interesting to interact with the different communities that we work in,” Dutton explains. “There are different challenges in the different places that we go for how people are adapting to modern day sea-level rise.”

As a scientist, Dutton believes she has a moral and ethical responsibility to share her knowledge and research with the communities they affect. “They have such important societal implications,” she says. Despite a widespread belief that it is not the scientist’s role to communicate beyond their research findings, Dutton uses various modes of communication to reach different audiences. “ “We need to be able to involve scientists in those conversations,” she explains. “Otherwise, we are excluding the people who have the most knowledge about scientific topics.”

Dutton hopes attendees will understand the value of science and the need to communicate it effectively. She believes there should be a more holistic approach to science research that considers its various elements and their implications for diverse people and places .

Attend the seminar on Tuesday, Nov. 15, in room 295 of the Frederick Albert Sutton building from 4-5 p.m. (or register to attend on Zoom) to learn more.