Adaptation strategies to climate change are often portrayed as having no downside. In the case of climate change-caused drought, responses are seen as successful if they prevent the city from running out of water. Although the city will still have water, adaptation initiatives can restrict the flexibility of future responses or change other parts of the system. Though adaptation strategies might be effective in responding to a particular impact, they can also create or introduce new problems or dependencies. It is important to look at our actions from multiple perspectives in the interconnected and uncertain world we live in.

Lisa Dilling, director of NOAA’s Western Water Assessment and associate professor at the University of Colorado, will explain why focusing on the ways different systems are connected can help better inform adaption to climate change at the GCSC Seminar Series on Tuesday, October 3, 4-5 p.m. in 210 ASB.

Instead of thinking as adaption as having “no regrets,” Dilling encourages us to think of adaptation as a tradeoff. Take, for example, the interrelations between water use and utility revenue. Utility companies charge customers by how much water they use. So, when large amounts of customers are using less water, the utility company receives less revenue. Reduced revenue makes it harder to save for maintenance or invest in long-term capital projects, thus potentially reducing the flexibility needed for future adaptation.

For Dilling, thinking of adaptation as a tradeoff requires thinking about the water supply as more than the amount of water. Instead, the water supply encompasses aspects such as revenue, political flexibility, and fairness.

“If people perceive policies as fair, they are more supportive than if they think some people have to reduce water usage while others are not,” Dilling explained. 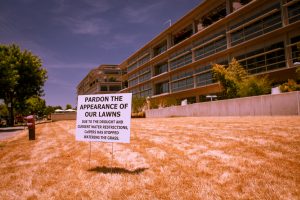 CalPERS and the Drought by Kevin Cortopassi via Flickr CC BY-ND 2.0

In response to climate change, Dilling encourages decision-makers, policymakers, and researchers to look past immediate impacts to see how adaptations will influence future responses or how they might create vulnerabilities. At the same time, it is also important to recognize adaptation is not universal. It will look different depending on the unique characteristics of the community.

In her upcoming lecture, Dilling will unpack some policies responding to drought and question how those may look in the future as our climate continues to change.

Dilling’s research focuses on understanding how different systems are connected, and how adapting to something, like drought, can make communities more vulnerable to other risk factors or more dependent on other things. Dilling is careful not to label decisions as good or bad, but rather increase awareness “of the dynamics of vulnerability shifts” by recognizing how systems are connected.