Thanks to UTA’s Ed-Pass, students, faculty and staff can ride the bus, TRAX and FrontRunner for no additional fee, making public transit the obvious choice for commuting to campus. Depending on where you live exactly, UTA service can either be an invaluable resource or a not-so-convenient option that doesn’t work well with your schedule.

For residents in southern Salt Lake County where UTA service is less abundant, accessing public transit is more challenging. To help bridge the gap, UTA launched its microtransit pilot program, UTA on Demand by Via, which intends to enhance connectivity to TRAX and FrontRunner lines for commuters in the southern part of the valley by providing on demand rides to and from TRAX stations.

What is UTA on Demand by Via?

Via’s technology matches multiple riders headed in a similar direction into a single van, with quick and efficient routing, avoiding lengthy detours. After requesting a ride, the app will display the pickup location where the vehicle will meet you. Via is a corner-to-corner service, meaning riders will be picked up and dropped off close to their destination.

How does it work?

Riders may hail a van by using the Via app, available on the App Store and Google Play. The microtransit service operates Monday through Friday from 6 a.m. to 9 p.m. and is available to students, faculty and staff at no additional fee. University affiliates with a valid uNID should use their Ed-Pass, in lieu of paying fare, by hitting the ‘UTA Pass/Ticket/Transfer’ when signing up.

ADA riders may request an accessible van by selecting ‘wheelchair accessibility’ in their profile.

For example, if you live in Draper and work on campus, you can get a lift to the Draper Town Center or Kimball Lane TRAX stations by requesting a UTA on Demand ride through the Via app. At the end of the day, you can be picked up at the TRAX station and return to where you started near your home, the grocery store or anywhere within the service area (see map below) for no charge. The service will also be useful for patients traveling to and from the South Jordan Health Center.

Why should I ride UTA?

A perk of the U community, all current students, faculty and staff members may ride UTA services, including the microtransit program, without paying fare. Choosing UTA over driving allows you to save money on car-related expenses including gas, maintenance and parking permits.

In addition to saving some green, you can also be green by choosing UTA over driving. Salt Lake City’s poor air quality is undeniable during inversion season. According to a recent study, “at least 85% of harmful emissions come from fossil fuel,” meaning the CO2 produced by cars is the lead contributor to the air quality problem Utahans face. Riding UTA will continually help reduce emissions and help keep our air clean.

Driving to the university campus from southern Salt Lake County may take anywhere from 30 to 80 minutes or more, depending on traffic and weather. While riding UTA will not likely decrease your commute time, it will certainly ease its difficulties and be safer, too. You’ll be able to start your workday sooner, catch up on emails, read or watch Netflix, instead of sitting behind the wheel in traffic or on icy, dangerous roads.

UTA on Demand by Via is a pilot program and UTA wants to hear from you. Take this survey to share your thoughts and help UTA study effective ‘first-and-last mile’ connections to our bus and rail services.

For more information on UTA on Demand by Via and all other services, visit call 801-RIDE-UTA. 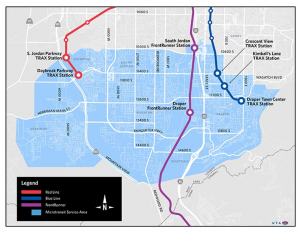 In a paper published in Environmental Research Communications, University of Utah researchers Daniel Mendoza, Martin Buchert and John Lin used tap-on tap-off rider data to quantify the emissions saved by buses and commuter rail lines, and also project how much additional emissions could be saved by upgrading the bus and rail fleet. The study was conducted in cooperation with the Utah Transit Authority and the Utah Department of Environmental Quality, Division of Air Quality.

Mendoza and his colleagues are certainly not the first to ask how much pollution public transit can save. But a couple of recent technological advances have enabled them to answer the question with a level of detail previously unparalleled.

The first is the advance of tap-on tap-off farecards that provide anonymized data on where those riders who have electronic passes enter and exit public transit. Approximately half of UTA’s passengers use an electronic fare medium. “Now we can truly quantify trips in both time and space,” Mendoza says. “We accounted for all of the 2016 passenger miles by scaling the farecard data, and we know which trips farecard holders make on buses, light rail and commuter rail.”

The second is the General Transit Feed Specification system. It’s the data source that supplies Google Maps with transit information to help users find the bus or train they need. With that data source, the researchers could track where and how often UTA’s buses and trains run.

So, with high-resolution data on the movement of both vehicles and passengers, the researchers could paint a nearly comprehensive picture of public transit along the Wasatch Front.

So, with that data, the researchers could quantify the emissions produced and miles traveled of the transit systems (TRAX light rail uses electricity produced outside the Wasatch Front, hence the emissions aren’t in Salt Lake’s air) and balance that with the miles traveled by passengers and the estimated amount of car travel avoided by riding transit.

On weekdays during rush hours, and in densely populated areas, the balance was clearly on the side of reduced emissions. “That tapers off significantly during the evening hours, on the outskirts of the city, and definitely during the weekends,” Mendoza says. In those situations, the number of passengers and how far they rode transit did not offset certain criteria pollutant emissions. (Criteria pollutants are six common air pollutants that the EPA sets standards for through the Clean Air Act.)

For transit to improve its regional reduction in emissions, particularly PM2.5 and NOx, the following strategies, alone or in combination, could be employed: more daily riders per trip, more clean-fuel buses and train cars and/or fewer low-ridership trips.

The current study looks at the bus and train fleet as they are now, with some UTA buses around 20 years old and FrontRunner trains whose engines are rated a Tier 0+ on a 0-4 scale of how clean a locomotive’s emissions are (Tier 4 is the cleanest; UTA is scheduled to receive funds programmed through the Metropolitan Planning Organizations to upgrade FrontRunner locomotives to Tier 2+). So, Mendoza and his colleagues envisioned the future.

“What if we upgrade all these buses, some of them from 1996 or so?” Mendoza says. “They emit a significantly larger amount than the newer buses, which are 2013 and newer.”

What if, they asked, UTA upgraded their buses to only 2010 models and newer, fueled by either natural gas or clean diesel? And what if the FrontRunner engines were upgraded to Tier 3?

Emissions of some pollutants would drop by 50%, and some by up to 75%, they found.

“Now, with this information, UTA can go to stakeholders and funding agencies and say, ‘Look, we’ve done this analysis,” Mendoza says. “This is how much less we can pollute.’”

Mendoza adds that taking transit offers additional benefits besides reducing air pollution. Taking transit gives riders time to read, work or listen while traveling. How does Mendoza know? He’s a dedicated transit rider. “I always get to where I need to go pretty much on time and completely unstressed,” he says. “I almost never drive.”