By the Sustainability Office

In a 2019 statement, University of Utah President Ruth Watkins told our community that the University of Utah is “committed to generating new knowledge in areas relating to sustainability, and to implementing best practices in university operations.” Yesterday, President Watkins announced she will be leaving the university this April. Looking back on her legacy, we in the Sustainability Office recognize the ways in which her actions during the past eight years highlight her commitment, and we know the benefits of her support will go well beyond her tenure at our institution. With her support, the U has bolstered efforts to reduce its impact on climate change, enhanced faculty capacity and collaboration, and better prepared students for the challenges ahead. 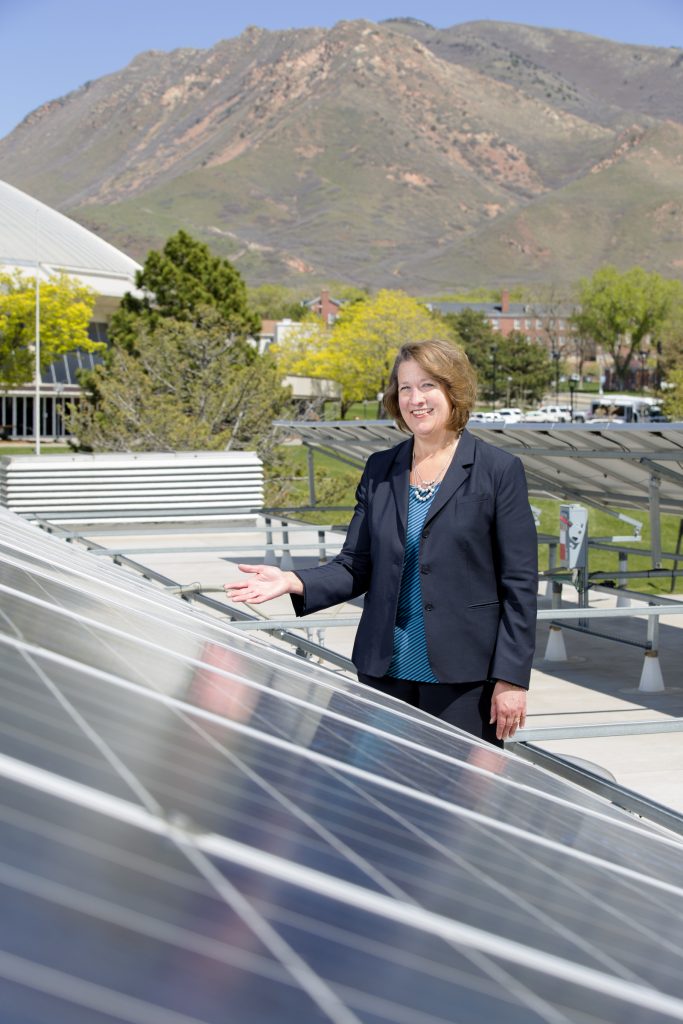 President Watkins has solidified the university’s commitment to reducing greenhouse gas emissions by signing on to multiple agreements—both local and national—that put the institution in a position to lead on climate change mitigation and resilience. In 2019, President Watkins signed the Presidents’ Climate Leadership Commitments, which renewed the U’s 2050 goal to be carbon neutral. In the same year, the university joined the University Climate Change Coalition, a group of leading North American research universities, to better connect expertise and accelerate regional partnerships. Just last fall, President Watkins was one of 100 Utah leaders to sign the Utah Climate & Clean Air Compact and commit to climate and clean air solutions identified in “The Utah Roadmap: Positive Solutions on Climate and Air Quality.” Her administration’s support  has also allowed the university to make significant progress in reducing operational emissions through energy efficiency and pursuing new contracts for energy that will allow the U to get two-thirds of its electricity from renewable sources.

President Watkins operated with a “One U” philosophy even before taking the helm. She supported efforts in 2015 to find ongoing, secure funding for the Global Change & Sustainability Center, the U’s hub for sustainability research. She was integral in the creation of the Transformative Excellence Program (TEP), which recognizes that intractable problems, including climate change, air pollution, and biodiversity, need creative and collaborative efforts not bound by disciplines. Exceptional hires through TEP are building the U’s capacity for interdisciplinary research and transformational education, benefiting students and faculty across campus. During her time at the U, President Watkins also directly supported stewardship and research around Red Butte Creek. She lent support and has been a featured speaker for the Wasatch Experience workshops, which expands sustainability curriculum at the U by engaging faculty in sustainability course design and implementations.

President Watkins signature achievement of improving students’ graduation rates exemplifies her focus on preparing an educated workforce to take on local, national, and even international challenges. That success extends to preparing students to engage in sustainability work. When students demanded more work on climate change, she signed the Presidents’ Climate Leadership Commitments and created the Climate Commitment Task Force with representation from students, faculty, and staff. She advocated for the Sustainability Energy Fund, a revolving loan fund that allows students to invest and participate in campus renewable energy and efficiency projects. She supported the creation of the Interdisciplinary Graduate Certificate in Sustainability, which helps students enhance graduate degrees by teaching them to think and partner beyond disciplinary boundaries. And during the past year, President Watkins and the administration have taken important steps toward creating an anti-racist campus through the creation of new positions to support students and faculty, as well as establishing the Equity, Diversity, and Inclusion Executive Committee to identify and change campus policies that perpetuate racism and white privilege.

We wish President Watkins well in her efforts at Strada Impact to address systemic barriers to education access and completion. She will be missed.