A vast network of canals and levees has turned Florida’s watery Everglades into a landscape of farms and suburban homes. Tight regulations mandate how water gets moved around, and where it gets delivered. But these water management practices are not without controversy or destructive environmental impacts, having transformed a formerly dynamic wetland into a heavily-managed and brittle system. When tested by increasing floods, the system can’t adapt.

What are the obstacles preventing the system from adapting? Through an investigation of the Everglades region and five other large-scale water systems, ecologist Lance Gunderson considers these obstacles and ways to overcome them.

Gunderson will present this research at the Global Change and Sustainability Center’s Seminar Series, Tuesday, March 21, 4-5 pm in ASB. 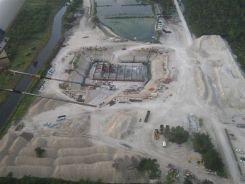 “0Merritt Pump Station construction Sept 2010 4” by JaxStrong is licensed under CC BY 2.0.

When the floods come, a major obstacle facing the Everglades are how the resolutions to any water disputes are solved – through litigation. Litigation pushes the system into a “rigidity” that inhibits managers from making effective decisions, Gunderson explained.

“The system can’t adapt to find other ways of getting rid of flood water which would help the environment, rather than flushing water out to the coast,” Gunderson said.

Though tight regulation presents a number of obstacles, the system’s rigidity has one bright spot – it has forced people to work outside of the system to find solutions. These small groups of stakeholders like scientists, residents, and government officials Gunderson calls “adaptive governance structures.”

“Rather than work in those formal ways of resolving conflicts, which I think pushes the system into that rigidity, you are now seeing the emergence of small groups, who actually are working outside the existing formal system of governance. These groups want to think about ways of solving these complex problems rather than going to court,” Gunderson stated.

Gunderson was a part of one such adaptive governance group in the 1990’s. His group worked together to devise different ways of thinking about water management that ultimately led to a 12-billion dollar system restoration plan in the Everglades. 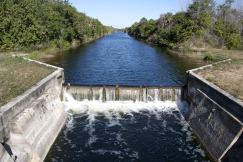 “Weir on Faka Union Canal” by JaxStrong is licensed under CC BY 2.0.

Cover Photo: “Scientist surveys a throw trap sample in the Phase I restoration area to evaluate prey availability for the wading birds and waterfowl” by JaxStrong is licensed under CC BY 2.0.