A man lies on a dismasted, rudderless fishing boat. He appears unimpressed by the sharks loitering off the port, and oblivious to the ship faintly on the horizon. This painting, “The Gulf Stream” by Winslow Homer, has been interpreted several times since its creation in 1899. Now, in our current climate chaos, Homer’s depiction of a shipwreck takes on a new meaning.

“Shipwreck captures both the moment of extreme danger, and the potential for rebuilding afterwards,” explained Jeffrey McCarthy, director of the University of Utah Humanities Program. “Shipwreck is an interesting symbol for us in this moment of a distressed and chaotic climate.” 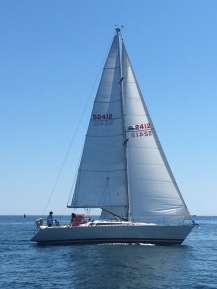 McCarthy on the ocean.

McCarthy will discuss the symbol of shipwreck, the paintings of Winslow Homer, and point to Joseph Conrad’s “Heart of Darkness” as a way to illuminate the humanities’ crucial role in understanding human relationships to the ocean and our climate future at the GCSC Seminar Series on Tuesday, April 4 from 4-5 p.m. in 210 ASB.

The ocean is essential to life on earth. It covers over 70% of our planet’s surface, and plays a fundamental role in shaping climate zones—even in places hundreds of miles inland. The ocean regulates earth systems, supplies living and non-living resources, and provides social and economic goods and services. Most of the oxygen in the atmosphere came from the ocean.

The ocean is the planet’s largest carbon sink. As it absorbs 26% of all CO2 released from fossil fuels, the chemistry of seawater is changing. The ocean has also absorbed 90% of atmospheric heat trapped by greenhouse gasses, which is increasing ocean temperatures. As life in the ocean changes, life on land will change too.

The ocean is less predictable, and less inhabitable for humans than its terrestrial counterparts. As we are entering a climate where there will be less predictability, analyzing seascapes can provide a way “to get our heads around what it means to occupy a space that is given to flux and uncertainty,” explained McCarthy. 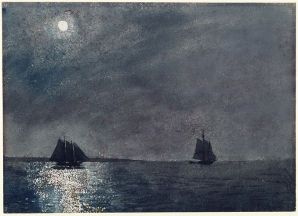 “Environmental literary studies, and environmental studies more broadly, has been largely terrestrial,” McCarthy explained. “It is time to expand our notion of the planet we occupy to include not just the green parts, but also the blue parts.”

Art is a powerful addition to the data on climate change. By capturing how a culture responds to moments of uncertainty and risk, art shows the human-scale of climate change. In his talk, McCarthy will explore how cultural analysis of art can be a tool for understanding the past and navigating future crises.

“Art can remind us who we are, and who we want to be,” McCarthy concluded. “There is hope and beauty with art. We could all use more of both.”

Learn more at McCarthy’s lecture, “The Watery Part of the World: The humanities, the ocean and the Anthropocene” on Tuesday, April 4 at 4 pm in 210 ASB.