Tipping Point, def.: the critical point at which a change becomes unstoppable.

Earth is undergoing an alarming series of changes due to human impacts. Warming climate, water shortages, increase in infectious diseases, and loss of biodiversity. These changes and others are converging into a rapidly approaching tipping point for Planet Earth. What individuals, groups, and policymakers do in the next 10-20 years will determine which way we will tip, and what kind of future the next generation of all Earth’s species will have.

On Tuesday, Feb. 28, 4:00-5:00 p.m., Anthony Barnosky will present on the Earth’s tipping points and their implications for political and personal action at the Global Change and Sustainability Seminar Series. The lecture will be held in 210 ASB.

With years of research on past tipping points in Earth’s ecological history, Anthony Barnosky, paleoecologist from Stanford University, focuses his efforts on activating humans to tip towards environmental sustainability.

“What I have done is use the fossil record to understand how the Earth system responds to big changes, unusual changes,” Barnosky said. “It inevitably took me into thinking about some of the big changes that people are causing to the planet today.” 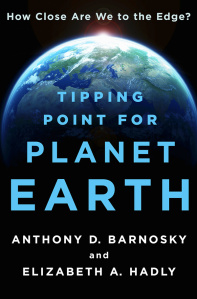 It is difficult to write about Barnosky’s research without sounding apocalyptic. He agrees that this is heavy stuff; however,  he wants people to know that their individual and local actions are meaningful.

“The sorts of issues that I talk about are very weighty, global issues,” Barnosky said. “People often throw up their hands in despair. But the reason these are big issues is that 7 billion people are doing things in a certain way. So, it really does all start with the individual. The cumulative actions of 7 billion individuals are enormous.”

Barnosky hopes the tipping point for Planet Earth won’t be catastrophic change, but rather large-scale social action. In this tipping point, 7 billion people use the knowledge, technology, and resources available to act in more sustainable ways. This vision of positive social action has driven Barnosky into conversation with policymakers.

In 2012, the governor of California approachedBarnosky to turn his Nature paper on Earth’s sixth mass extinction into a scientific consensus statement. The governor was able to use the consensus statement, which was signed by more than 500 scientists, to advocate for positive action towards avoiding a tipping point.

Barnosky also had advice for other scientists about how to effectively collaborate with policymakers.

“It’s not just walking into a policy maker’s office and pronouncing what the science says,” Barnosky concluded. “Working with policymakers means actually asking what are their needs are as far as science. Developing a dialogue is very important so that you understand where they are coming from, and they understand where you are coming from.”

Cover Photo: Biodiversity by Dano, CC by 2.0 via Flickr